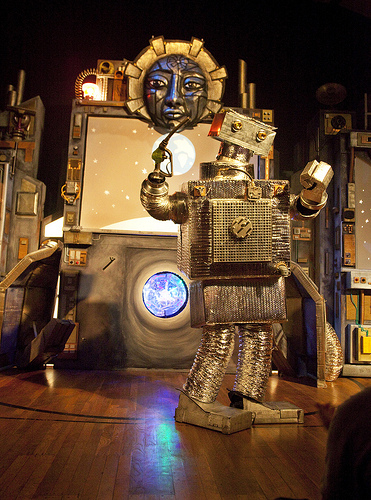 A Puppet Rock Opera in zero’s and one’s.

In the beginning, Messenger is created by a wily scientist along with his cybernetic gorilla. The final component in this experimental robot is a heart… a heart that will change the world forever.  The messenger spreads his message of love to the robotic community, but is captured and taken to an undisclosed location by Mega Corp.

Created in the winter of 2009, this show features paper-cut shadow puppets and a variety of robot creations made of old vacuum cleaners, hoses, wire, cardboard and other assorted junk.  The set is a giant steam-punk super computer robot church on the moon.  Set to live original music by Jimmy Magoo and performed by the Paperhand band.

Written and Directed by: Jimmy Magoo and Donovan Zimmerman

Music by: Jimmy Magoo and The Paperhand Band